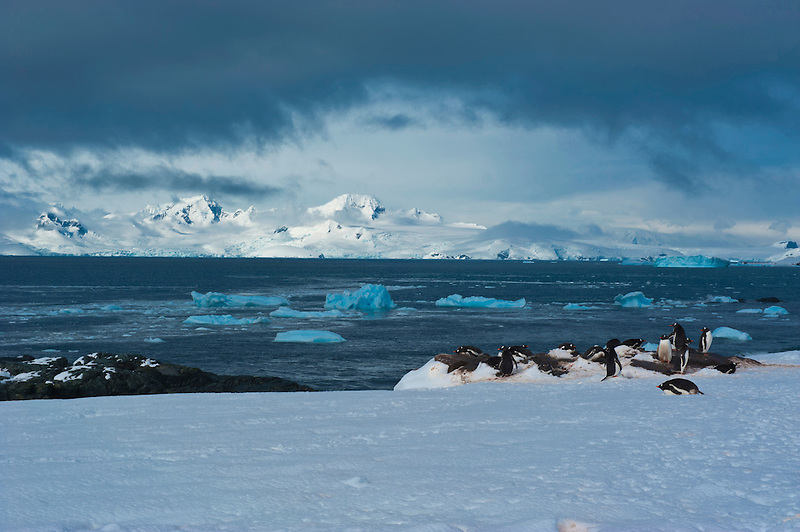 Antarctica was always a dream of mine to visit. My intention was originally to do the long trip going to Antarctica, South Shetlands, South Orkneys, South Georgia and the Falkland islands. Since this is an extreme expensive trip to do, my only chance was doing a last minute trip, considerably cheaper. Unfortunately one month before I intended to board the icebreaker I received the message that all boats were sold out. The only option was to do an Antarctic in depth trip which included the South Shetland Islands. I flew more or less three days from Lord Howe island in the South Pacific via Sydney, Auckland and Buenos Aires down to Ushuaia the southernmost town in the world in Tierra del Fuego. After two days there I boarded together with 120 other tourists the icebreaker “Expedition.  Actually it is not a real icebreaker but has an ice-class degree of breaking  ice that other boats wouldn’t been capable. For the first six hours the boat passes through the Beagle channel and we were so far very lucky since it was sunny and the sea calm. But this was just until midnight and than you feel the impact when two Oceans come together. Cape Horn is one of the toughest sea passages in the world and you can feel it immediately. 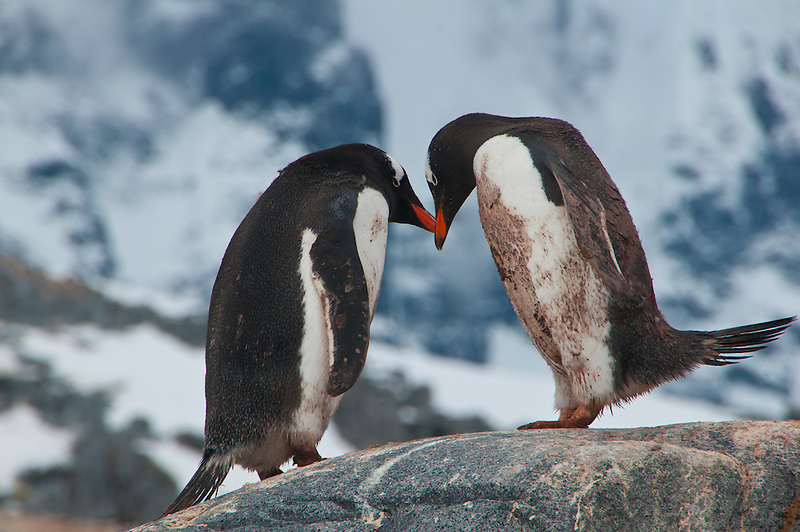 The sea had waves up to eight meters and for the next two days I preferred to stay most of the time in the cabin I shared with another German Jens and Tashi from Japan. I didn’t get seasick but I definitely felt better lying down. After around 40 hours suddenly the waves got smaller and we knew that we were arriving in the South Shettlands. Best of all not only the waves came down but although the sun came out. First stop was Half Moon Island were we although had our first landing. Those landings are made by very strong Zodiacs, little rafts made of rubber. This was a very magic moment since the mountains were enlightened in orange light from the late sun. It was already nine in the evening but the sun hardly goes down at this time of the year. 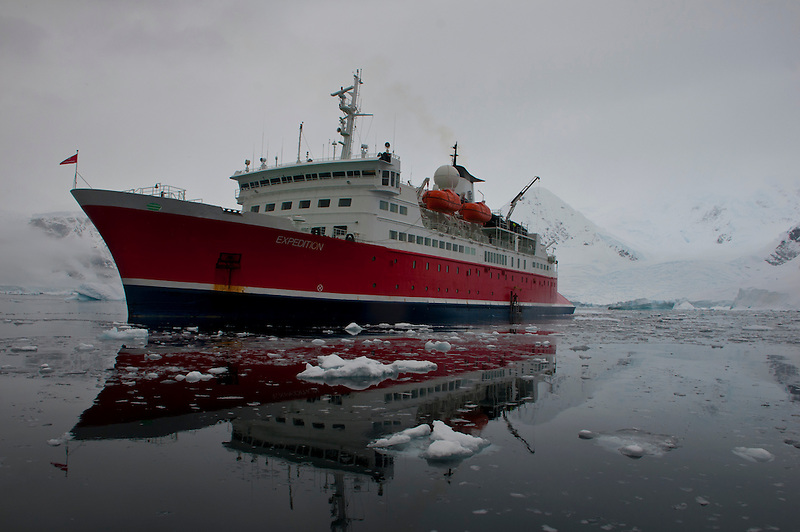 So like the penguins you visit all the tourists walk in one line towards the rookery. The next day we approached Deception Island an active volcano which is only accessible by a very narrow entrance. This used to be one of the most active whale watching stations in former times. It is very impressive to see this almost round shaped island. 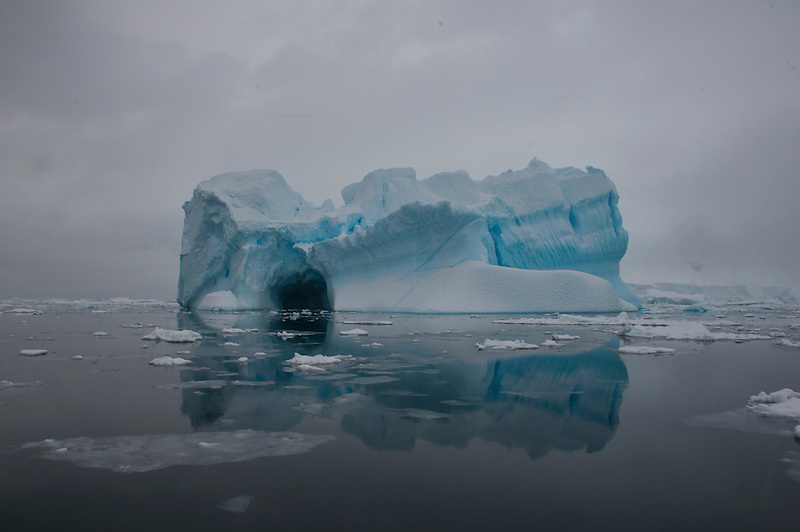 After a landing and hike on top of a new crater we had the chance to plunge into the Antarctic ocean. The temperature of the water was -1,5 degrees and usually you wouldn’t do that but how often do you have a chance to do something like that. So more than 60 people decided to have a quick dip. Interestingly it was not really that cold, in contrary when you come off the water you feel almost warm even when the outside temperature has only 3 degrees. After a overnight cruise we arrived in Antarctica. For the next four days we visited some research stations like Port Lockroy which is more a museum than a station as well some bays where you see the incredible Icebergs and spot seals, whales and Penguins. The whole landscape is just breathtaking especially when the sun comes out it is just breathtaking. You feel really that you are on the end of the world and nature is much more powerful than the human being. The giant icebergs are floating around and when you cruise around with the Zodiacs you feel really small compared to those giant blocks. 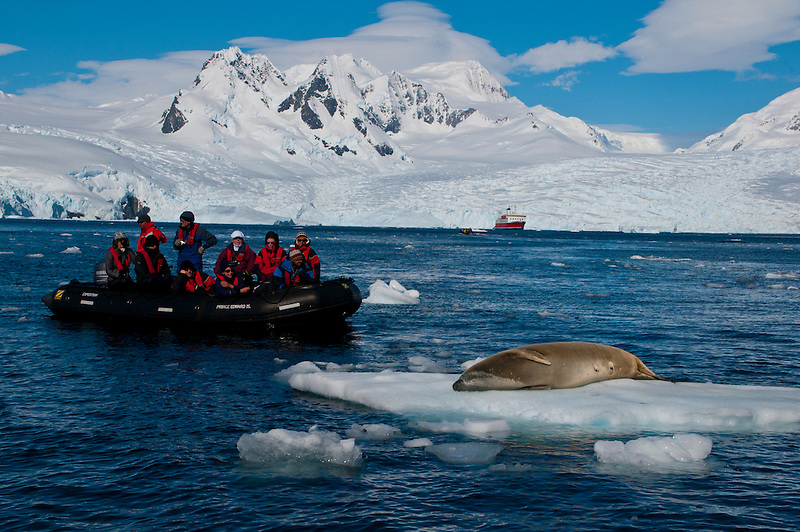 Everyday is a new experience there since you never know what happens. The ice changes all the time and even if you have a program the conditions force the captain to change it all the times. The team on board did a great job, always friendly always informative they did the best what they could do under those conditions. Every day they have lectures about the wildlife, environment and geography. So after the trip you joined those lectures you got a good idea about the seventh continent. On the way back we stopped on Arctovski Point a polish station on the South Shettlands. Here we able to see elephant seals from close up and Antarctic grass which is unique there. From there we headed back for the next two days. Again my favorite spot was my bed. 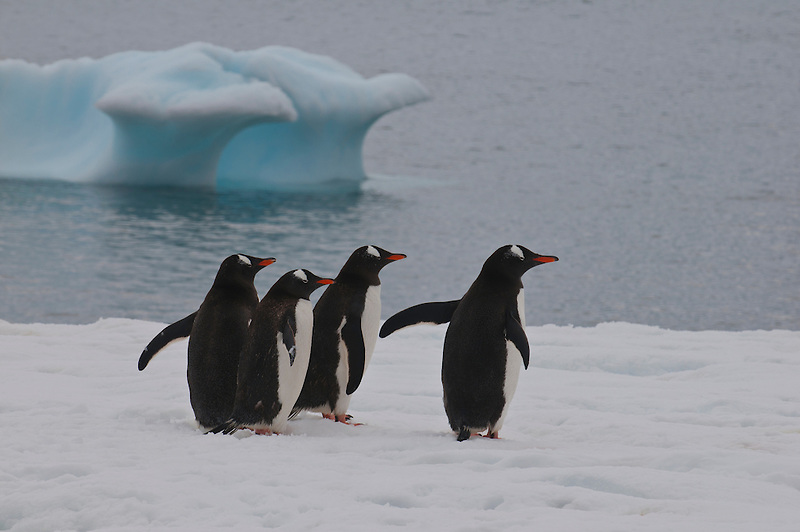 After twelve days we arrived back in Ushuaia. This was one of the best trips I had ever done in my live. Antarctica is different to anything else I had done before. It is expensive but worth every Euro.

In the gallery you find a small selection of that trip. Enjoy it![/vc_column_text][/vc_column][/vc_row]