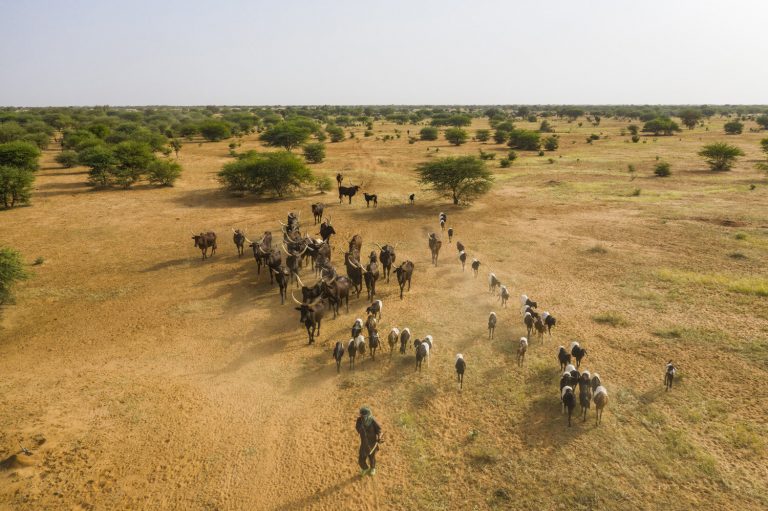 Cattle at the way to their waterhole, Niger

This post was originally written and published by my wife.

One morning in late September, I woke up to a sleuth of video clips on my phone: a psychedelic procession of men covered in ochre and charcoaled makeup, beaded head palates and feather plumes, swaying ecstatically to a polyphonic chorus. Reaching far into the recesses of my mind from my college days, I also guessed they must have been under the influence of some sort of hallucinogenic, or at the very least, a trippy tea.

A very different reality to mine (in San Diego, shuttling the kids back and forth to pre-k and baby music classes), Michael was in the most interior part of Northern Africa, the Sahel. He had been talking about photographing a festival called Gerewol for years, and now found himself among a group of Woodabe- nomadic cattle-herders and traders spanning southern Niger, Nigeria, Cameroon, southwestern Chad, and the western part of the Central African Republic.

They were in the throes of a three-day love festival. The winner would be chosen as a mate: for the evening, and if they were lucky, for life. 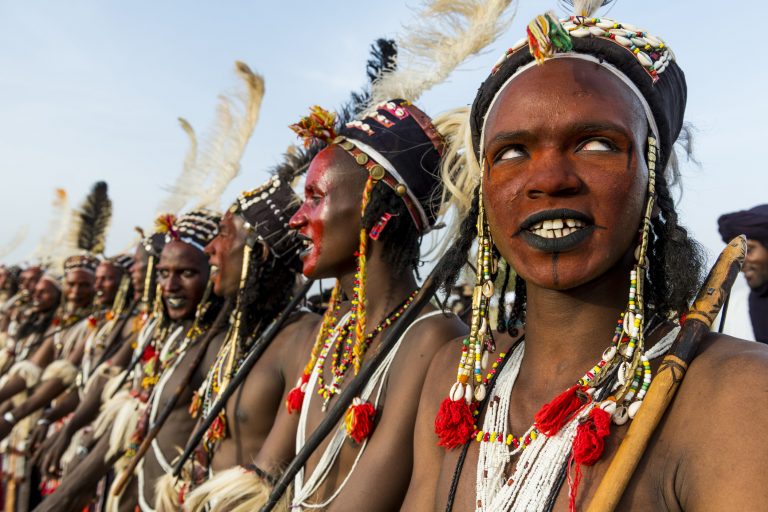 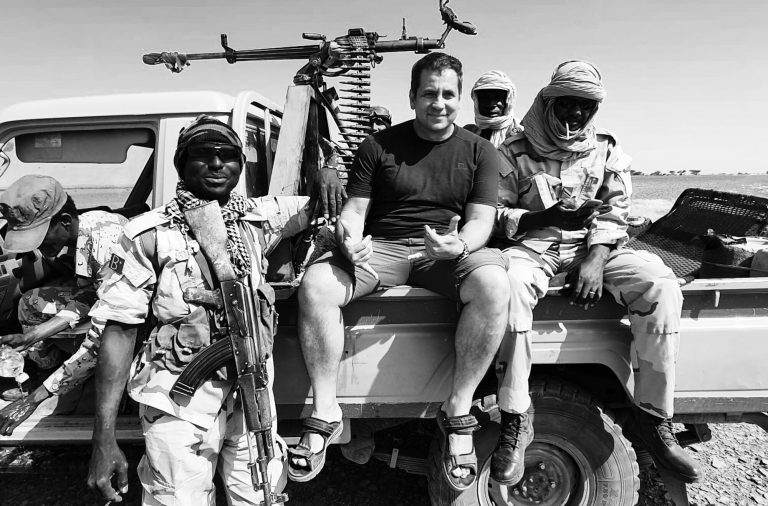 Michael had reached the Sahel backcountry from Agadez via military convoy (Agadez was a traveler’s hot spot until 2006, when al Qaeda came to the the Tenere Desert. Since 2015 it has become a traffickers hub, picking up migrants en route to Libya and the Mediterranean).

It was the end of the rainy season, when the Woodabe have finished their annual odyssey across Saharan Africa, following the water and traveling together in small groups.

By what I have read and what Michael has told me, life for these nomads is harsh, survivalist, lonely. It is an unlikely place to hold a courtship festival: according to the UN Human Development Index Niger is one of the poorest countries in world, with the third lowest GNI and the worst health and development problems. And because of increasing desertification and land degradation, and much of the population is food-insecure.

But now, it was Gerewol time. 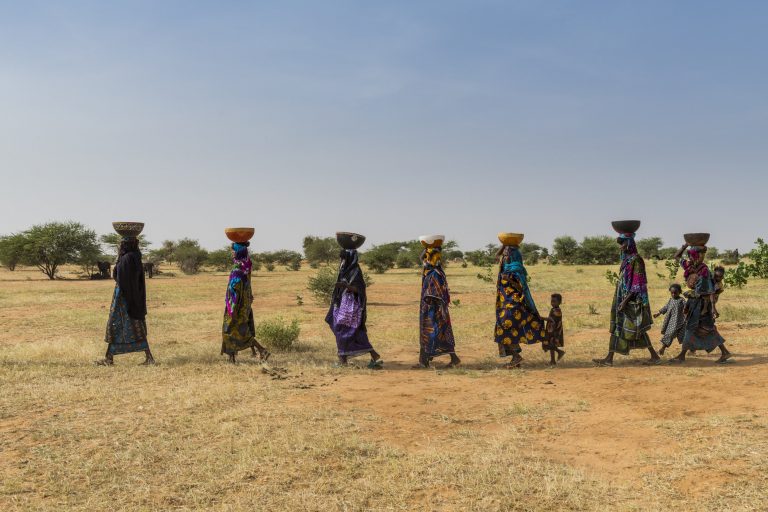 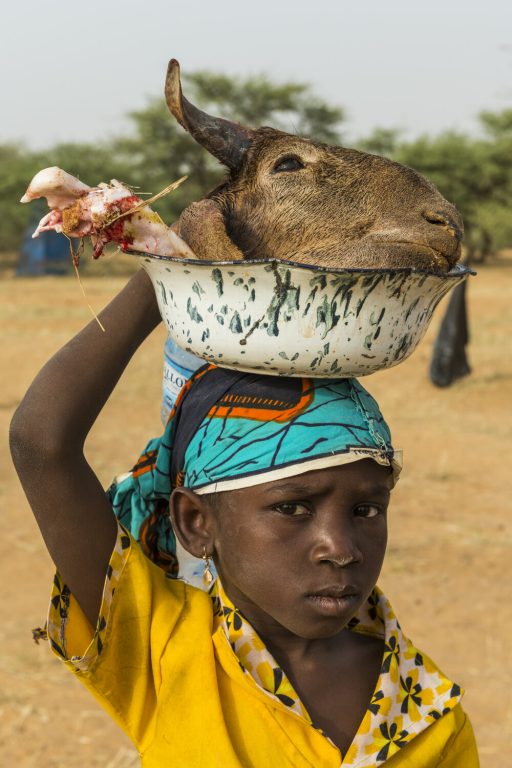 The Woodabe are known across the African continent for celebrating beauty (I’ve read they are called “the vainest tribe in the world”). But here in the Sahel, physical beauty is less about superficiality and more an intrinsic part of life.

The ancient Greeks believed perfect proportions were the key to a woman’s beautiful face. In Heain, Japan, it was long hair. Among the Woodabe it is elongated necks, high cheekbones, symmetrical faces and white teeth and eyes that win a mate. I came to learn this is why the men grin wide and enlarge their pupils during the ceremony. 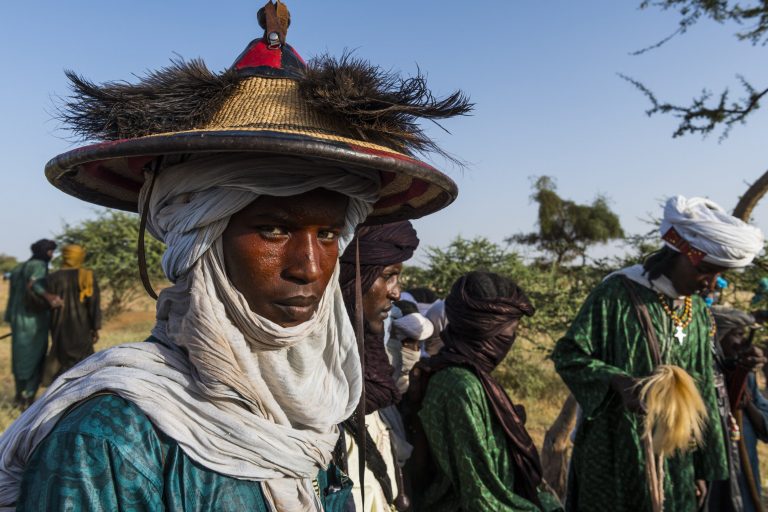 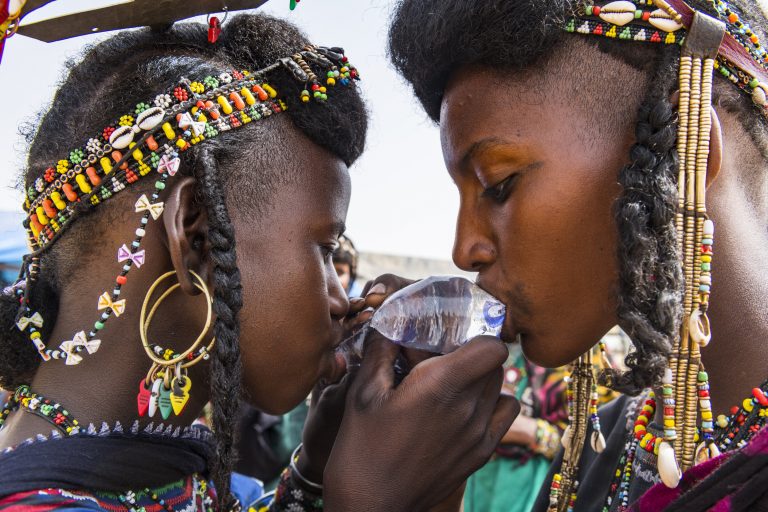 Over the course of days, Woodabe men will prep, primp, and prune in anticipation of being chosen as the most attractive. They gaze into pocket mirrors and apply ochre to their skin and black battery acid to their lips unsparingly, then peacock about until the gathering. The men drink a concoction of “fermented bark” (see above, “trippy tea”), and convene in a circle for days on end, singing and chanting in a psychedelic trance. At the end of the celebration, master of ceremonies (what Michael called “a witch in a hat”) along with a few women, determines who will be chosen. The winner may spend the night with her, and if all goes well, she will even be allowed to leave her current marriage for him.

The Woodabe turn our prudent Western standards of sexual politics on its head. A polygamous, polyamorous tribe by nature, it is also the reason Gerewol hasn’t happened in recent years- al Qaeda in the region has threatened expression of sexual freedom.

For more images from Gerewol, check out my Niger gallery.